On Superbowl Sunday, I experienced the “Superbowl of Chicken.” I had chicken for lunch, chicken for an afternoon snack, and more chicken for dinner! The craziest part was that I was not sick of chicken by the end of the day — I wanted more because it was all so delicious.

Part I: Zuni Cafe, or “Yes, I really did order and consume a $48 roast chicken.”

Since I was in Tahoe for SB’s birthday, I missed her birthday bash and offered to make it up to her a week later. She suggested Zuni Cafe, one of the most famous restaurants in San Francisco. I’ve wanted to go there for several years now and this seemed like the perfect opportunity. The dish that they’re most known for is the roast chicken with bread salad. Not only it is famous for its deliciousness, but it’s also notoriously expensive. At $48, it is probably the world’s most expensive roast chicken. A few justifications for the cost:

Despite these great reasons, I still waffled about whether to order it. I decided to consult the Yelp reviews. Here, I will go on a tangential rant regarding my love/hate relationship with Yelp. (Go ahead and skip this paragraph if you want to get to the good stuff on the actual food.) I love Yelp because it has directed me to many restaurants, especially when I’m new to a place. Like the time when I was in downtown DC for a conference and wanted to escape the terrible, made-for-tourists food in DC’s Chinatown. Yelp helped me find great hole-in-the-wall places that satisfied my tummy and my wallet. On the other hand, Yelp reviewers can be so aggravating. There are the people who write an entire novel without focusing on the food, but instead concentrate who they were with or how they were feeling. I DON’T CARE. If you want to rant, start a blog or something. The other group that I can’t stand are the people who have overblown expectations and/or a certain sense of entitlement… or else they don’t put the restaurant in perspective. For instance, my experience tells me that good service and Chinese restaurants do not go hand-in-hand. So don’t complain about the bad service you got at Mandarin Peking Garden or whatever, OK? Anyway, so the Yelp reviews were steering me in the direction of, “the chicken is overrated and overpriced, blah blah blah.” However, I wisely surveyed some friends who heartily recommended the chicken. (MS and AJ – thank you!) And since I trust my friends more than Yelp reviewers, I decided to order the chicken. OK, end of rant.

So, JBL, SB, and I met up at Zuni Cafe. We ordered the chicken as soon as we sat down, knowing about the long wait. In the meantime, we enjoyed cocktails and appetizers. JBL and I both ordered the Prossecco and elderflower cocktail (I think that’s what it was anyway). The three of us shared all of the dishes, because as you know, “Sharing is caring!”

We started with the Frisée salad with sultana raisins in anisette, Manchego, hazelnuts, and shallot vinaigrette. Then we had the poached egg with white beans, artichoke, fennel, and currants. 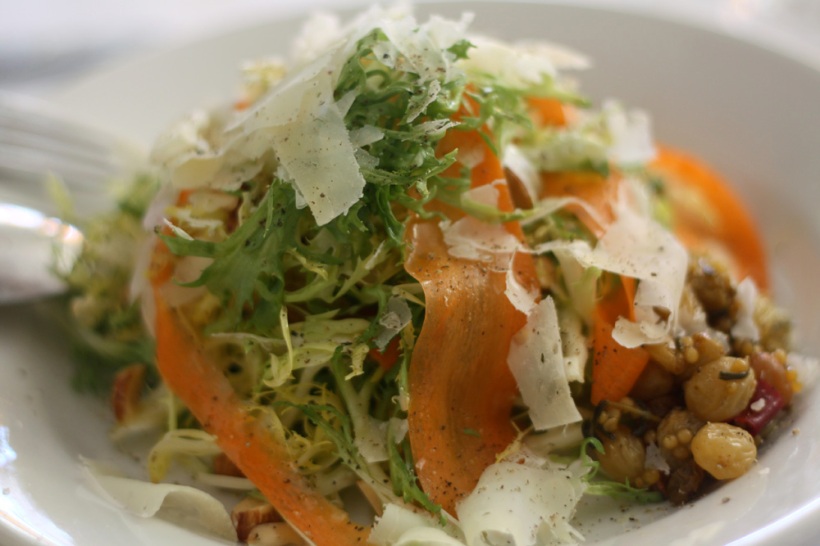 Both the salad and the egg dish were delicious, but the best was saved for last. The roast chicken arrived on our table and I immediately started drooling. Even though it took 45 minutes to cook, it only took us 15 minutes of silent, ravenous eating to devour all but 1-2 pieces of the bird. It was moist and tender, with perfectly crisp skin and seasoned just right. Definitely the best roast chicken I’ve ever had. Oh, remember the bread salad? It’s basically delicious sourdough bread that is cut to just the right size to be soft in the middle and crunchy on the outside, all flavored with a savory blend of olive oil, balsamic vinegar, and chicken drippings. Yes, it’s as delicious as I make it sound and then some. 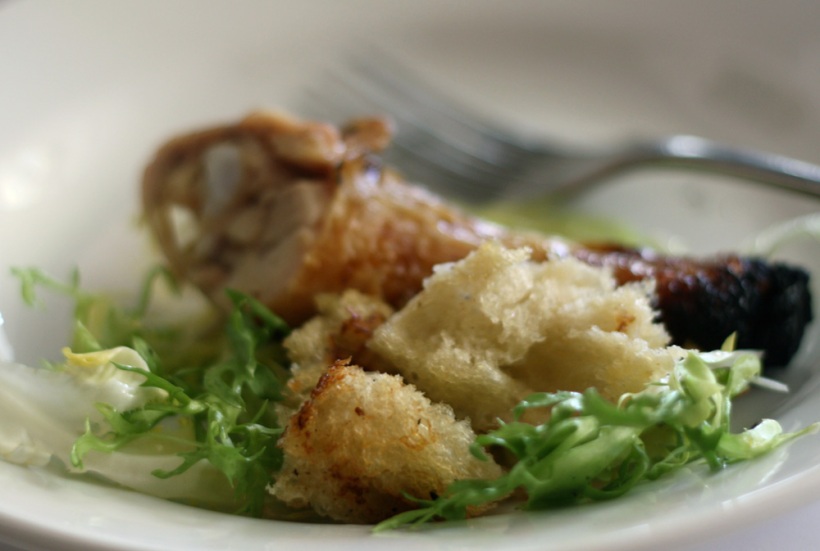 Even after all that food, we still ordered dessert. It was SB’s birthday, after all, and how can we celebrate without cake? We shared the Gâteau Victoire with whipped cream, which is just a fancy way of saying flourless chocolate cake. On a related mini-rant, the only problem I had with Zuni Cafe was the semi-pretentious menu. It was one of those places where almost every menu item had one word that was unknown. Generally, I don’t like to feel stupid while deciding what to eat. But then I get over myself and humbly ask the server what X, Y, or Z means.

Room for dessert? Only if it's flourless chocolate cake!

Espresso: the perfect ending to a great meal.

I was slipping into food coma and had little room in my stomach for a full cup of coffee. A shot of espresso was exactly what was needed to remedy the situation. All in all, it was a perfect lunch. Happy birthday, SB (again)!

Howdy! My name is Jen and I live in the San Francisco Bay Area. I like to eat, run, and blog, but not usually at the same time.

2 thoughts on “Superbowl of Chicken, Part I”