Two weeks back and I’m finally getting around to posting about my trip to Taiwan. I took hundreds of photos, so I went through and selected the ones I thought were most representative of my trip, while also picking out some food photos (of course). They’re haphazardly organized into 3 sections: Chinese food, non-Chinese food, and miscellaneous (people, places, things). I should also note that many of these pictures are courtesy of my sister JS. Thanks sis!

Are you ready? Here we go… 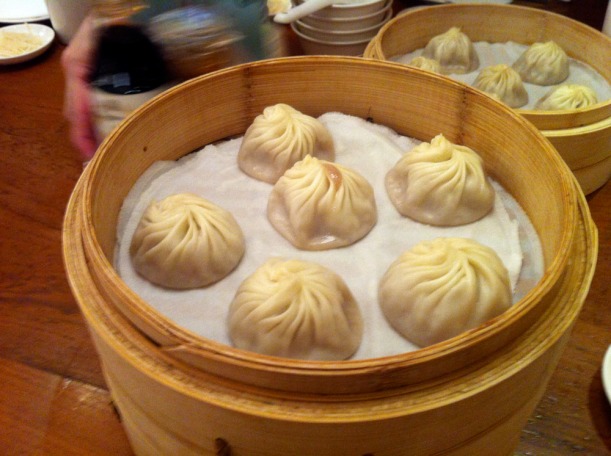 I’ve blogged about these previously. We ate at Ding Tai Fung twice. I wish I had just ordered 20 for myself.

This is a photo from one of the lunches we had at a stir fry restaurant. It was really good, but we ordered too much food. I was stuffed.

At the same restaurant (as above). See, I’m such a nice, nurturing girlfriend! 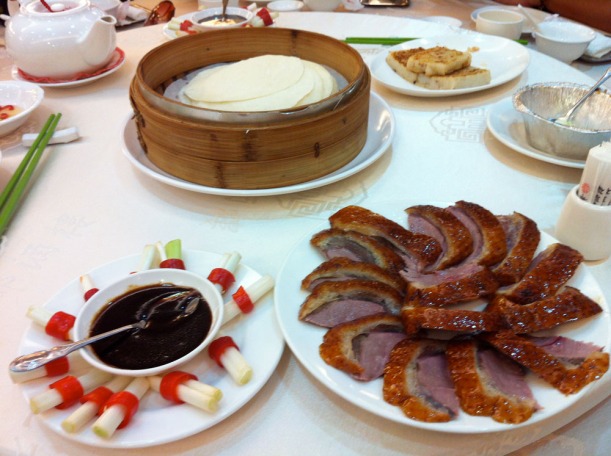 The best Peking duck EVER, which I’ve also blogged about previously.

Dim sum with the family.

We ordered too much again, so we played “spin the lazy Susan” to see who would have to finish the last piece of food. My niece “won” when the food landed in front of her, as my dad and I were eager to point out. 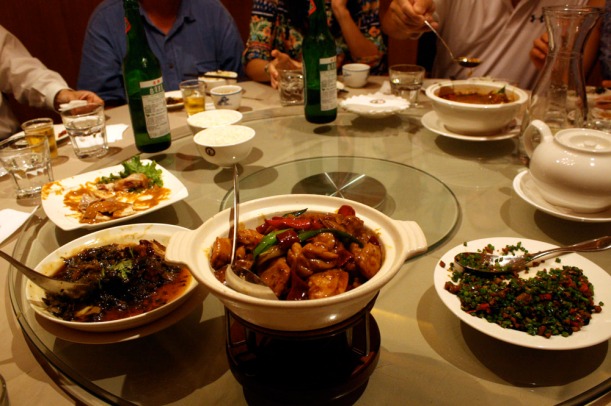 At Kiki, a Szechuan style restaurant, for a gathering with my cousins. This is only 1/3 of the food that we got. Once again, it was delicious, and once again, I was stuffed.

On our last full day in Taiwan, my mom arranged this buffet lunch at my uncle’s karaoke joint. These are just the hot items; there was also a table full of salad, pizzas, and fruit. 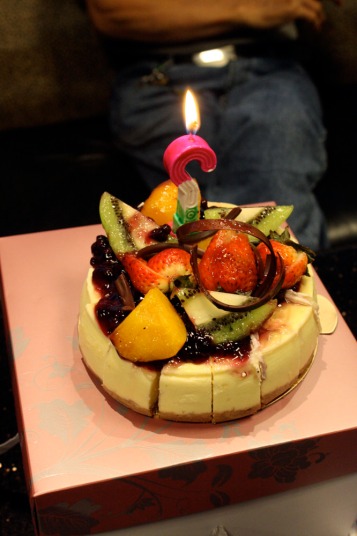 At this same karaoke/lunch buffet feast, we celebrated Father’s Day early (in Taiwan, it’s on August 8th). My mom’s friend from elementary school, Auntie Huang, brought this yummy cheesecake. Of course, cheesecake isn’t Chinese or Taiwanese, but I do think they have a different take on it in Taiwan.

Shaved ice, two ways. On the right is the more traditional version, with tapioca balls and boiled peanuts. On the left is shaved ice with fresh mango topped with mango ice cream. Both were doused with sugar water.

My sister P and her husband cooked us this simple and delicious pasta. I really enjoyed it, as it was one of the few truly homecooked meals we had the whole trip!

This was our first lunch at a ramen place in Taipei Main Station. TC got the fried rice. It was much better than the ramen, which was overly garlicky even by my garlic-loving standards.

After the ramen, we went and got some fancy mochi. Despite appearances, it was not good. Very disappointing. 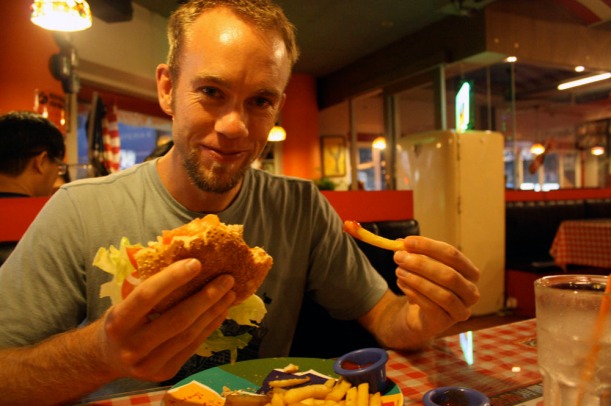 After about 4 days of non-stop Chinese and Japanese food, TC was craving Western food. So, we made a stop at Coke Forest, which appears to be a rip-off the fairly successful TGIF franchise. Anyway, it was decent.

We also ate a lot of pizza. My cousin’s husband is now the pizza chef at my uncle’s restaurant, serving (more or less) authentic American pizzas. They were delicious! 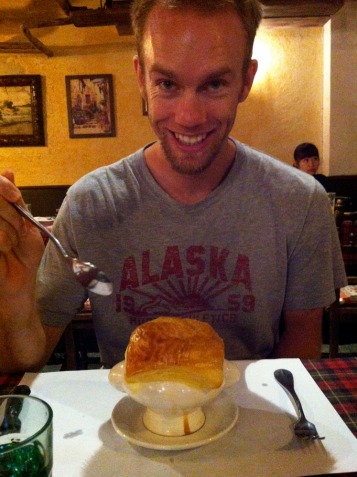 For dinner one night, we went to a Western style steakhouse, where you typically order a set menu that includes salad, soup, appetizer, main course, dessert, and a beverage. TC opted to get the croissant-like dough on top of his soup. He was a big fan.

Some cute bear donuts from Mister Donut, a Japanese donut chain that is super popular in Taiwan. I finally tried one of their donuts, and honestly, I don’t understand the appeal. Kind of bland and dry. 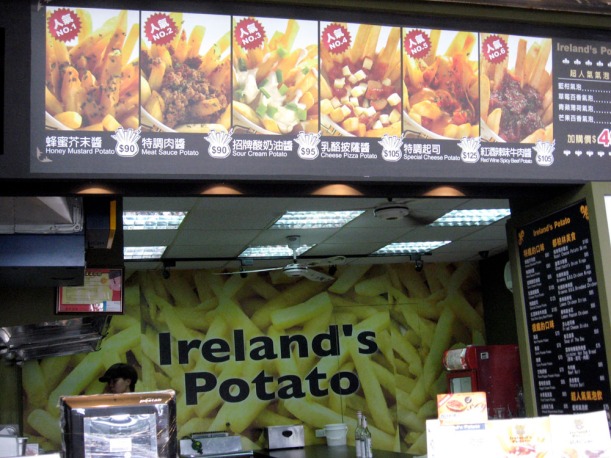 There’s a relatively recent chain called “Ireland’s Potato,” which features fries with all sorts of toppings, ranging from the familiar sour cream and onion to spicy wine meat sauce. Hm…

TC and I on the plane from SFO to TPE, ready for our big adventure.

Some hella steep stairs at Yangmingshan National Park. Some of the steps were knee-high.

My dad makes his own special gruel for breakfast, with a blend of every kind of seed, oat, grain, and yogurt you can possibly imagine. TC was a big (and only) fan.

My whole family, minus 2 nephews.

Stay tuned for upcoming posts about our side trip to Taitung and Green Island, as well as a post featuring delectable Taiwanese-style beer snacks/”tapas”!

Happy New Year! Hope everyone is having a great start to 2011 so far. Do you have any food-related resolutions? I don’t usually believe in making resolutions, but if I had to state a couple I’ve been working on since the end of 2010, they are:

So far, so good. I’ve been making some simple, yet delicious veggie dishes and sides. When I come across a winner, I’ll post the recipe here.

Back to the blog! I’m going to overindulge you with photos, just as I overindulged in Taipei. It was a real shame that I wasn’t more hungry when I visited the following buffets. I felt truly hungry maybe two times in the two weeks I was there, and a tinge of hunger less than 5 times. For reals. I still tried to adhere to my buffet rules, though I’m fairly certain I didn’t get my money’s worth. Sad face.

First up: a Japanese buffet. It doesn’t really matter about the name because it wasn’t that good. It gets good marks for pretty presentation, but the food was just so-so and the desserts were very disappointing. I had a nice time with my family though!

The sushi station (with guy giving me a funny look, to the left). Also, check out the ginormous carrots!

The dessert table looked appetizing but ended up being disappointing.

Again, a beautiful presentation of mussels that didn't deliver in taste. 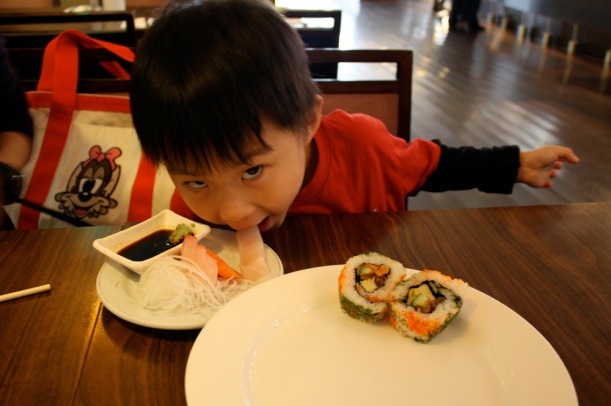 They had made-to-order hand rolls. Not bad. 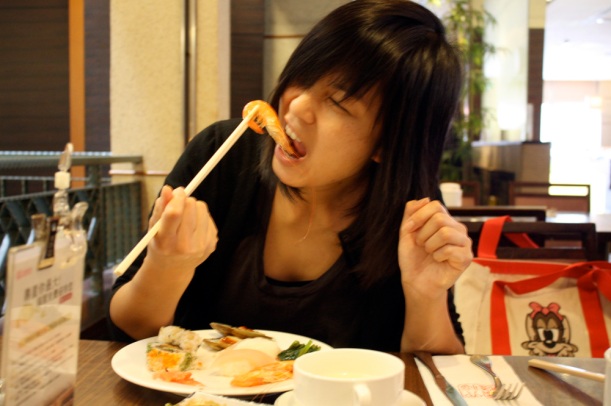 This poor shrimp was no match for my appetite.

Since the desserts sucked, I had star fruit and passion fruit instead.

Next: my family and I took a mini-vacation to Yilan, a city 1.5 hours southeast of Taipei by train. We stayed at the lovely Silks Place hotel, where we were given complimentary vouchers to the breakfast buffet. This breakfast smorgasboard was amazing, featuring a wide selection of Chinese, Japanese, and Western-style morning treats. My sisters and I especially loved the porridge bar, where every conceivable topping was available (it doesn’t take much to make us happy). 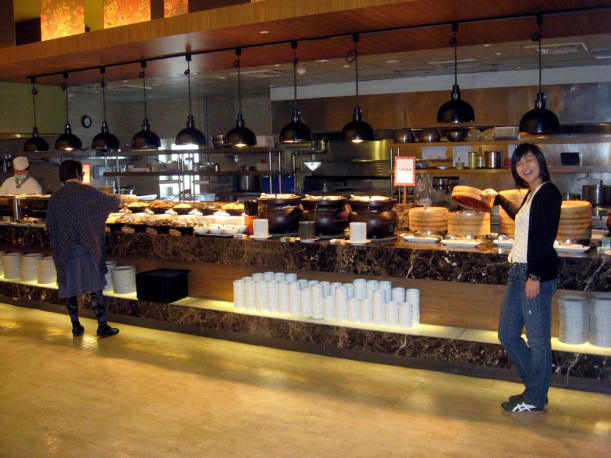 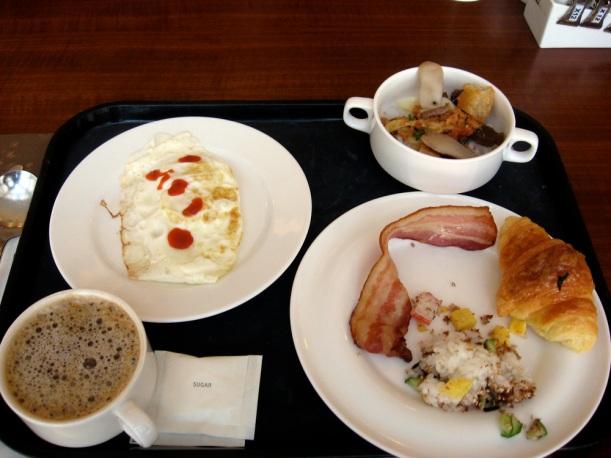 My first round, clockwise from top left: fried egg with hot sauce, porridge with goodies, plate of bacon, croissant, and Japanese rice, and a cafe latte.

Everyone was very happy with their food.

Finally, we went to the Japanese buffet at Wasabi, in the Taipei 101 mall. My mom had discount vouchers, reducing the price of lunch from $25 to a more affordable $17. I enjoyed my food; it was all very fresh and high quality, but we were annoyed that they charged my 4 year old nephew (who only ate rice and a few pieces of veggie tempura) $12. Lamesauce. 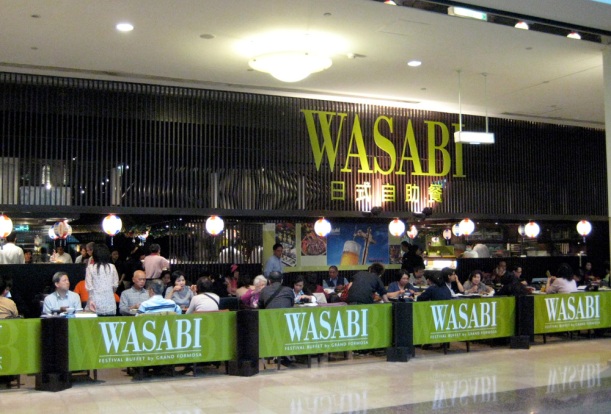 The view of Wasabi from the mall.

My first round at Wasabi: lots and lots of fish and other sea creatures.

My sister and dad, with a plate of fried food. Someone decided not to follow my buffet rules!

My mom and I ready to chow down! 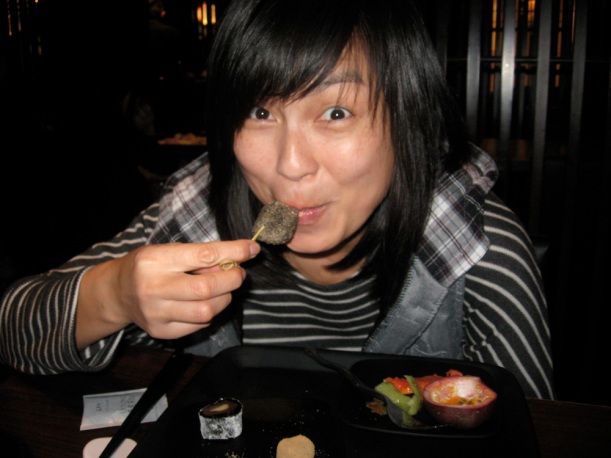 The mochi was really good. Two thumbs up!

Sorry for the delay in posting. I’ve been very busy… but no excuses! Let’s get to it, shall we?

Saturday, 20 June
No food photos that day because I was: A) Preoccupied by the naked cyclists at the Fremont Summer Solstice Parade (Fig. 1); B) By the time we had lunch, I was starving and subsequently scarfed down the delicious food at J&B’s bbq/potluck party before I thought to take any pictures; C) The mid/late-afternoon bbq was the only proper meal I had, followed by a dirty martini at the Big Picture (movie theater + bar that was reminiscent of a much swankier version of The Parkway — RIP). Post-movie, we went for ice cream and french fries at Dick’s Drive In, a local favorite.

What? I was on vacation. You can’t expect me to eat 3 square meals (and take photos) when I’m chillaxing. 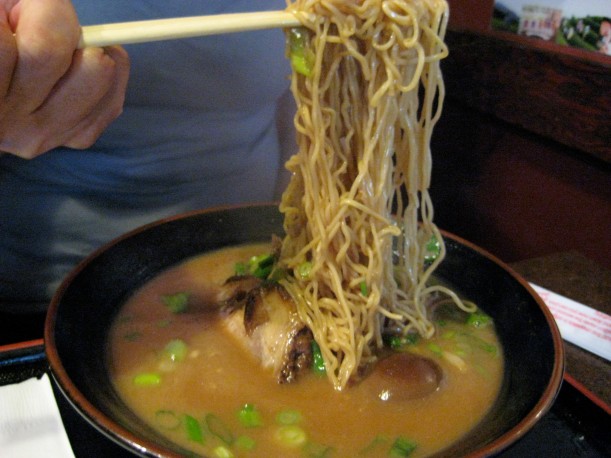 We had lunch at Samurai Noodle in the International District. It was tiny place, with maybe 4 tables total, so we were very fortunate to snag one as another group finished their meal. They make their ramen to order, so you can customize your broth richness, noodle chewiness, and amount of meat. When the bowls arrived, I thought they were on the small side, but it ended up being perfectly proportioned to avoid food coma. We also had room for dessert, in the form of Chinese baked goods (not pictured).

My bowl of ramen. Delicious.

Between lunch and dinner, we took advantage of the beautiful weather and of Seattle’s amazing Happy Hour specials. We sat out on the deck of Eastlake Bar & Grill and enjoyed late afternoon drinks and sweet potato fries.

View from my chair at the Eastlake Bar and Grill. Lovely.

For dinner, we returned to the International District and hit up Tamarind Tree, a Vietnamese restaurant with an extensive menu and tasteful decor. To start, we had the spring rolls (or did we get the Tamarind Tree rolls?) and the cinnamon pork rice balls.

B shows us how it's done.

For our main entrees, we ordered a seafood dish, a veggie claypot dish, and a beef dish… the names of which escape me, and I can’t find them on their online menu.  All three were good, though I think the veggie claypot was my favorite because the mushroom flavor was really rich.

Seafood sautee with pineapple and veggies. 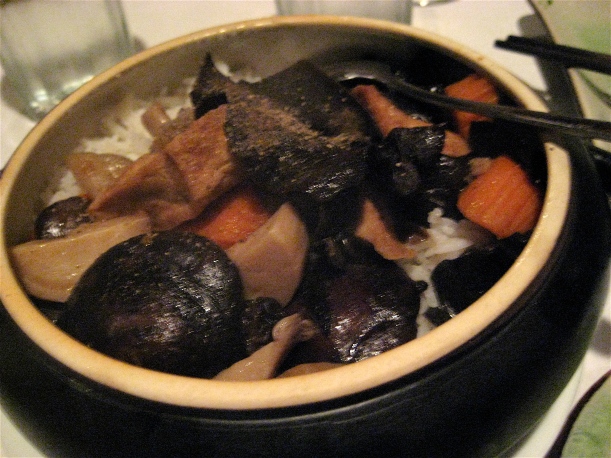 Mushrooms (shitake, oyster, and black) and braised tofu over rice in a claypot.

Beef. It's what's for dinner.

Monday, 22 June
I had lunch with B close to UW campus at his favorite pho place, Pho Thy Thy (sorry no photos again). The pho was good and cheap, and every meal came with a cream puff. You gotta love that.

On our way to the airport, we stopped by the Essential Bakery. By this time, J & B had gotten me on a regular caffeine intake regimen, so I couldn’t say no to one more delicious Seattle espresso. 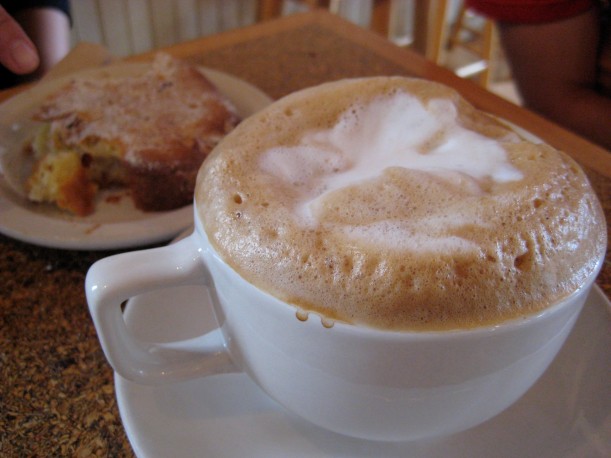